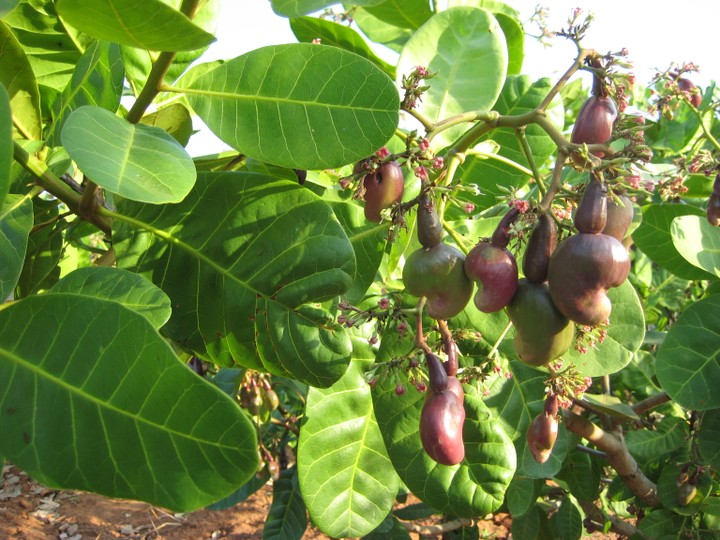 6 Comments on Cashew farming in Nigeria: Unlimited OpportunitiesPosted in Agriculture By MaxipharoPosted on August 21, 2019September 2, 2019

Cashew farming in Nigeria offers numerous opportunities in the value chain for any individual willing to invest. Millions of Nigerians make fortunes from cashew farming yearly due to the high demand for its products. Cashew is mainly grown in Nigeria because of the export value of its nuts. According to FAO Nigeria is the 6th largest exporter of Cashew nut in the world.

Cashew botanically named Anacardium Occidentale is native to Brazil but introduced to other parts of the world starting from the 16th century with the main intention of afforestation and soil conservation, but has become a major source of foreign exchange in most of the countries.

Cashew grows almost everywhere in Nigeria but is concentrated primarily in the southern and middle belt regions by small landholding farmers. Major cashew growing across in Nigeria are Enugu, Abia, Imo, Anambra, Ebonyi, and Cross River States in the Eastern part of Nigeria; Oyo, Osun, Ondo, Ekiti, and Ogun States in the western part as well as Kwara, Kogi, Nasarawa, Benue, Taraba, Niger and Abuja in the middle belt and also Sokoto and kebbi state in the Northwest part of the country.

Cashew is typical of a tropical plant and fruit sensitive tree crop that starts fruiting from February and lasts till near rainy season in Nigeria. Its fruits are freshly harvested within this period for processing and consumption. Also, the nuts when fresh are normally sold raw or processed to some degree before being sold or exported.

According to FAO 2015 report, Nigeria production of cashew nuts estimated at 0.97 million tonnes, which suggest that the cashew nut market is relatively large globally.
Cashew products (fruit and nuts) has been identified as a major contributor to the economy especially the Gross Domestic Product (GDP). Which has been guided by the National Cashew Association of Nigeria (formerly Cashew Association of Nigeria (CASHTAN) having identified that cashew has been ranked an excellent cash crop after cocoa.
Cashew farming in Nigeria has not been able to satisfy the demand of its products globally from countries like India, Indonesia, USA, Japan, Australia, Canada, and Middle East Countries, this gives room to any potential investor to take advantage of the value chain in cashew farming.

listed below are requirements for starting a Cashew farm in Nigeria
Capital
Capital is necessary for starting a cashew plantation, as it is required for acquisition and preparation of land, acquiring and preparing planting materials and other necessary activities that are geared at developing a cashew plantation. It is recommended that proper evaluation of the venture should be carefully accessed to determine the cost implication before settling to establish a cashew plantation.
Soil
Cashew is tropical and has a general notion that it is very modest in its soil requirements and can adapt itself to varying soil condition without impairing productivity. However, establishing a cashew plantation on good soils-deep and well-drained sandy loam would surely improve its performance. Red sandy loam, lateritic soils and coastal sands with slightly acidic pH have been reported best for cashew. Nevertheless, soil fertility improvement and maintenance can be employed because cashew is very sensitive to nutrient deficiencies, poor drainage and soil pH (above 8.0)
Land preparation
The land selected for cashew plantation should be thoroughly ploughed and levelled, depending on the selected land condition, cost of land preparation may vary but at best cost implication should be considered and ensured to be timely, especially before the rainy seasons when planting should be done.
Layout and Planting
Cashew trees are generally planted with a spacing of 7 to 9 meters adopting square system on level land and a triangular system for sloppy land. Planting spacing of 7.5m × 7.5m (177plants/ha) or 8m × 8m(156 plants/ha) is recommend. Also, to enable a higher return rate during initial years, high-density planting method of 4m × 4m (625 plants/ha) at the beginning with periodic thinning out of the plants is recommended.
Cashew planting can be done with fresh seeds whose viability can easily be tested by its ability to sink in water or may be raised in the nursery or as seedlings. Also, propagation techniques such as grafting and layering may be used in planting. Planting should be aimed at the onset of the rainy to facilitate germination, growth, and establishment; alongside other cultural activities like mulching, fertilizer application, reseeding, irrigation, weed, and pest control.
Harvesting
Cashew usually matures 3months after flowering, which is usually around January, February. The cashew nut is separated from the fruit. The fruit can be eaten raw, dried. Canned or squeeze for juice production.
The nuts are sun-dried for 3-4 days, stored and ready for export.

Products from the cashew tree

Cashew Apple or fruit (this can be eaten raw or preserved to serve as raw material for companies that produces Juice, jams or beverages).
Cashew Wine- This is very popular in Asian countries
Cashew Nut – Nuts gotten from cashew trees can be processed in various ways either roasted or salted
Cashew nut Shell Liquid {CNSL} this is one of the major raw material used in the production of friction powder in the automotive industry, acid-resistant paints, insecticides, and fungicides.

After the collection of the nuts, they are sundry for 3-4 days on a flat surface, avoid using metallic surface while drying. Ensure the nuts are spread evenly to ensure uniform drying.
The moisture content must not be more than 8% after drying. The dried nuts can be packed in a jute bag sealed and stored in a cool and darkroom. Place the jute bags on wooden pallets to avoid moisture absorption from the floor.